Peloton Interactive Inc. (PTON, Financial), a company that offers connected fitness services via the combination of its bikes and treadmills and a monthly subscription service for access to digital workout classes, has been one of the banner successes of the Covid-19 pandemic.

The pandemic caused a sudden sharp increase in demand for at-home workouts and at-home workout equipment, the two things that are Peloton’s specialty. This tailwind helped propel the company to a revenue growth rate of 106.7% and an Ebitda growth rate of 13.8% since its initial public offering in September of 2019, and Peloton even reported positive quarterly earnings in most of 2020.

That’s not to say the company wouldn’t have been successful without the pandemic – its sales were already beginning to pick up in the last quarter of 2019. However, investors cannot deny that not only did the pandemic boost Peloton’s sales, but it also catapulted its stock price as people piled into “pandemic stocks.” 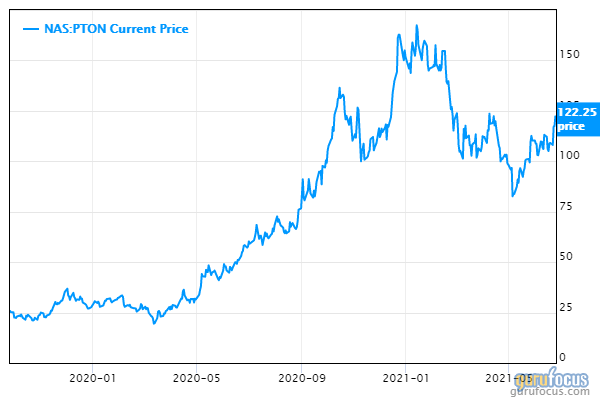 However, enthusiasm for the stock has begun to wane, with prices falling 21% since the beginning of 2021 as the pandemic tailwind disappears and people return to gyms and other forms of away-from-home workouts in the U.S. Could Peloton’s glory days already be over thanks to stock market mania?

Temporarily leaving aside the issue of the high-flying stock price, let’s take a look at Peloton’s growth prospects as it navigates the post-Covid market.

Peloton set out to make spinning classes and other group workouts more accessible by bringing the workouts to people’s homes. The high cost and exclusivity of these activities have made such workouts largely exclusionary in the past, with classes averaging around $175 for a bundle of 10 in many places. That adds up quickly, and people who enjoy such classes often have to limit themselves to going only once or twice a week. At upwards of $2,000, the initial cost of a Peloton bike or treadmill is high, but the monthly subscription fee of $40 is far cheaper than in-person group training sessions and can eventually make up for the steep initial cost.

Over the past year, Peloton has gained a cult-like following that gives it a strong brand image. The subscription can be shared within a household and is often seen by users as a replacement for a traditional gym membership. While sales growth will likely be dampened going forward, that doesn’t mean the company will be stagnant from now on.

Peloton also continues its efforts to expand its business. For example, it recently acquired exercise equipment manufacturer Precor in a $420 million deal, which it expects will help resolve its supply chain issues so that it can produce more bikes and treadmills.

Peloton brings in revenue both from the sale of its machines and its subscriptions, but customers who buy its stationary bikes and treadmills don’t necessarily have to pay for the membership subscription every month. There are free features that customers can utilize during months where they do not wish to or are unable to pay the subscription fees. Some also prefer to use the high-tech machines without instructions from Peloton’s classes.

At least, that was the case until a couple of days ago, when Peloton dropped a bomb on customers: they can no longer make use of the treadmill’s free “just run” feature without a Peloton membership. The company claimed the decision was due to the safety issues with treadmills; so far, Peloton has only made the “tread lock” feature, which sets a passcode to unlock the treadmill for use, available for paid subscribers.

The company was quick to reassure customers that they were working on making the tread lock feature available for free users as well, and that they would re-release just run for everyone once the change was made. However, it did not provide a date that this would be completed on. The best estimate so far is based on that fact that the company also gave Tread+ owners three months of free membership. Presumably, the just run feature will be available for free again after that, but this is just an assumption and has not been confirmed.

Taking away the feature sparked instant outrage among many customers, with some even threatening legal action. The worry here is that if Peloton can get away with disabling free features once, it might do it again. The company has complete control over whether or not its machines can be used, which may spark wariness in potential customers.

Years of growth already priced in

Given Peloton’s attractive products and strong brand image, it is likely to continue enjoying years of sales growth. According to estimates from Morningstar analysts, the company is expected to bring in revenue of $4.0 billion in fiscal 2021, $5.2 billion in 2022 and $6.8 billion in 2023. Earnings per share estimates stand at 10 cents for 2021, 58 cents in 2022 and 99 cents in 2023.

As of June 24, the stock has a price-earnings ratio of 147.68 and a forward price-earnings ratio of 145.30. This high valuation means that if the company disappoints on earnings, it could see its multiples drop. Additionally, in order for investors to obtain capital gains on the stock by investing at the current price, either the earnings multiples need to increase or the company needs to grow much faster than expected.

Perhaps Peloton will be bringing in annual earnings per share of $10 some day in the distant future, and if it does manage to become that profitable, then shares might still be a buy at the current price. However, that would be many years in the future if it does come to pass, and the future is highly uncertain.

Like with many other companies offering a product that experienced a rapid rise in popularity, Peloton saw its stock bid up to high levels on investor enthusiasm for further share price growth. That price growth already factors in many years of earnings growth, which means that any further capital gains would depend on earnings multiples remaining high or expanding in the future.

Betting on continued high earnings multiples is risky, especially for a company like Peloton that operates in a niche market. Those who didn’t buy Peloton in 2019 or early 2020 may feel like they really missed the bus on this stock, and they would be right. However, having missed an opportunity in the past does not mean that the stock will gain another 400%-plus over the next year.

If the stock price continues to grow in response to positive earnings announcements in the future, it will almost certainly do so at a more moderate pace. If investor enthusiasm for the stock begins to wane, earnings growth might not be able to prop up the stock.

admin - June 1, 2021 0
It is the tribunal that has one of the most sensitive roles in the state's health and justice systems — overseeing the treatment of...

Can the Clothes You Wear Help You Become The Man You Want to be?

admin - August 23, 2021 0
The boss of health insurer Nib has warned that persistent coronavirus lockdowns will result in fewer healthcare treatments across the country, making it...

admin - October 23, 2021 0
It's been three months since Peta-Anne Louth underwent surgery for a hysterectomy.Key points:About 30,000 women undergo hysterectomies in Australia each year vNOTES is a...

admin - October 23, 2021 0
As Victoria recorded 1750 cases on Saturday, it emerged that 29 per cent of those recorded in Melbourne on Friday were under the...